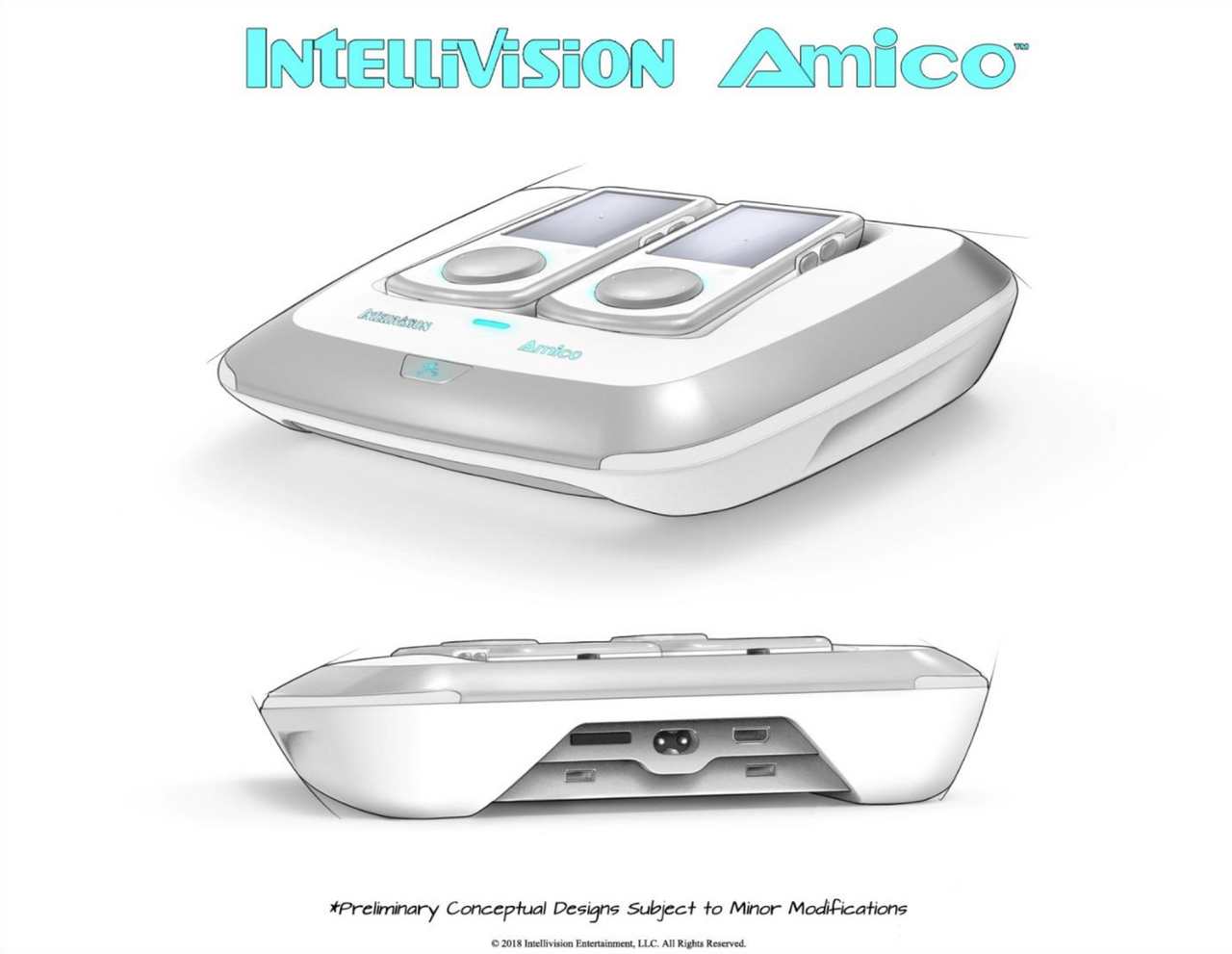 Tommy Tallarico (formerly of G4TV fame, music producer behind Video Games Live concerts, Metroid Prime, and currently President of Intellivision), has teamed up with creators who worked on the Nintendo Wii and Nintendo DS to produce a brand new system with a totally different approach to gaming. While the console currently known as Intellivision Amico will not attempt to compete with PS4 and Xbox, it will instead forge out its own path co-existing alongside the current console market.

At first glance, this could seem like another Kickstarter project waiting to disappoint folks like Ouya or Atari VCS. The reality couldn’t be farther from the truth. There’s no Kickstarter involved. Some of Intellivision’s team members include the minds behind cloud gaming, the marketing team for Wii Sports, developers of Metal Gear Solid, and more. Real developers are putting hard work into bringing a very unique and interesting vision to life.

Amico, which means “friend” in Italian, is a new 2D console that will release in 2020 with major hardware and software development behind it, numbering in the tens of millions, by industry veterans who know what they’re doing. With a keen eye for high quality games, a unique hardware setup at an affordable price range, and a totally different approach to the industry, Amico stands a real chance at being something special. 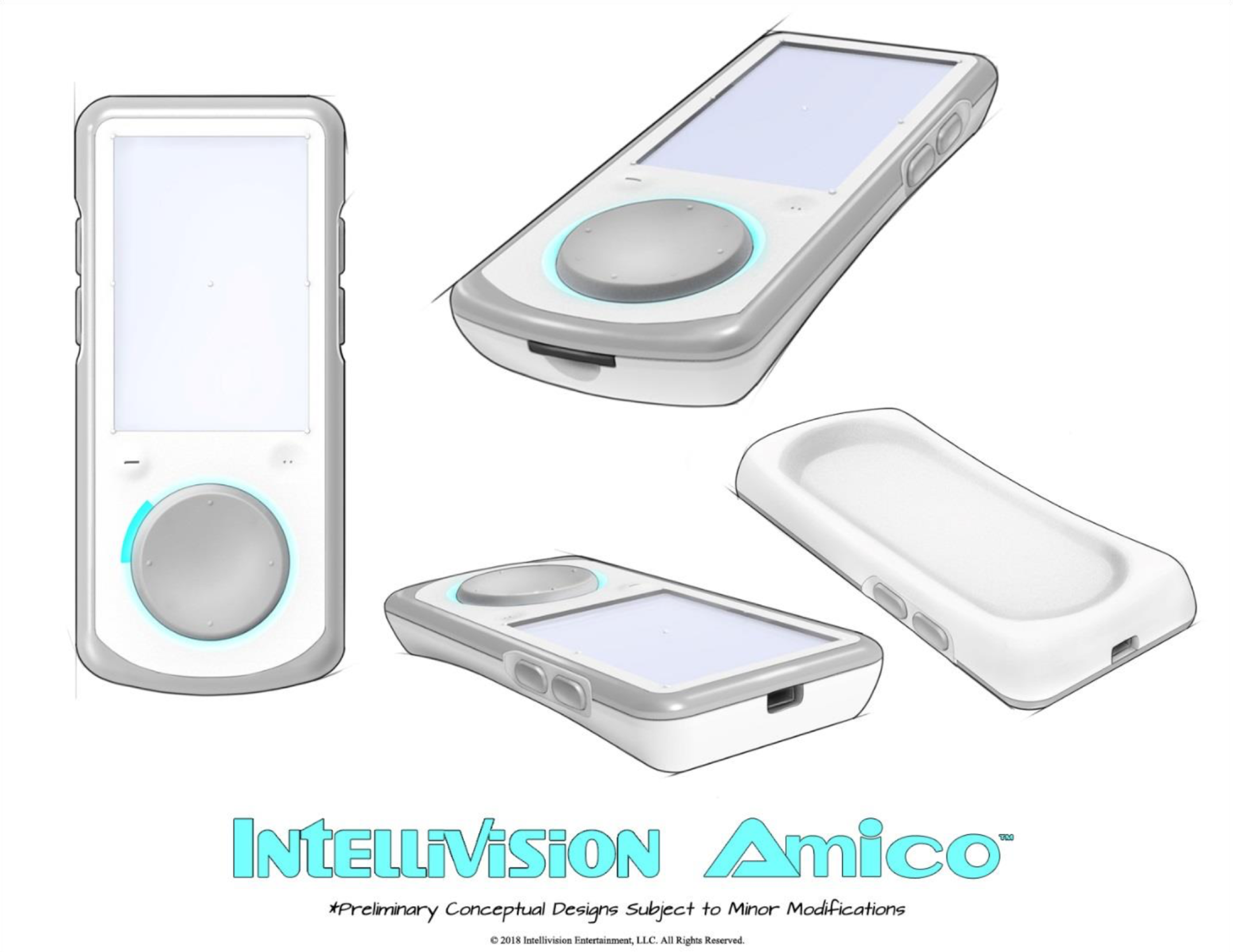 Tallarico states that Intellivision Amico will only have exclusives games that won’t appear anywhere else. There will be no direct ports. Instead, New IPs can be made by existing studios, spin-offs, or sequels to existing IP can be made for the Amico, or custom re-envisioned versions of pre-existing games with exclusive features like new multiplayer, new controls, new audiovisual effects, new levels, etc. can be created for the machine.

It has also been confirmed that the the Amico will come out with exclusive must-have games and some of the biggest developers in the world making games for the Amico on day one. There are three internal game development teams and various third party developers already working on titles as we speak. A powerful proprietary chipset is also being made by an internal team of electrical engineers.

Adding further assurance to the seriousness of these claims, Intellivision is also part of the Entertainment Software Association, something that Kickstarter projects like Ouya and Atari VCS did not have. Intellivision will also have their own custom software development tools to make it easy for quality games to be created on the system.

Tallarico tells us that the Amico is not only for hardcore gamers, and aims to bring back the days of making memories gaming with the family while trying to uplift the discovery of excellent pixel art indie games as well as deliver redesigned classics. In terms of technology there is a lot to love here as well including wireless Qi charging, force feedback, interactive LEDs, gyroscopes, accelerometers, bluetooth, USB, WiFi, HDMI, and a lot more. There’s even a promise that no game will have costly DLC or microtransactions on Amico!

One false claim going around in which the president of Intellivision Entertainment was taken out of context was that the Amico would provide better 2D graphics and gaming than PlayStation 4 and Xbox. Tallarico corrects the statement by saying he never said that and instead what he had said was something very different. 3D games are possible on the Amico but 2D toolkits, APIs, SDKs, and things like direct access to critical processes are all making development optimized for classic-style games. Titles like Cuphead are actually very hard to make on modern consoles simply because all of the tools released by Microsoft, Sony, and Nintendo are created for high-end 3D projects. 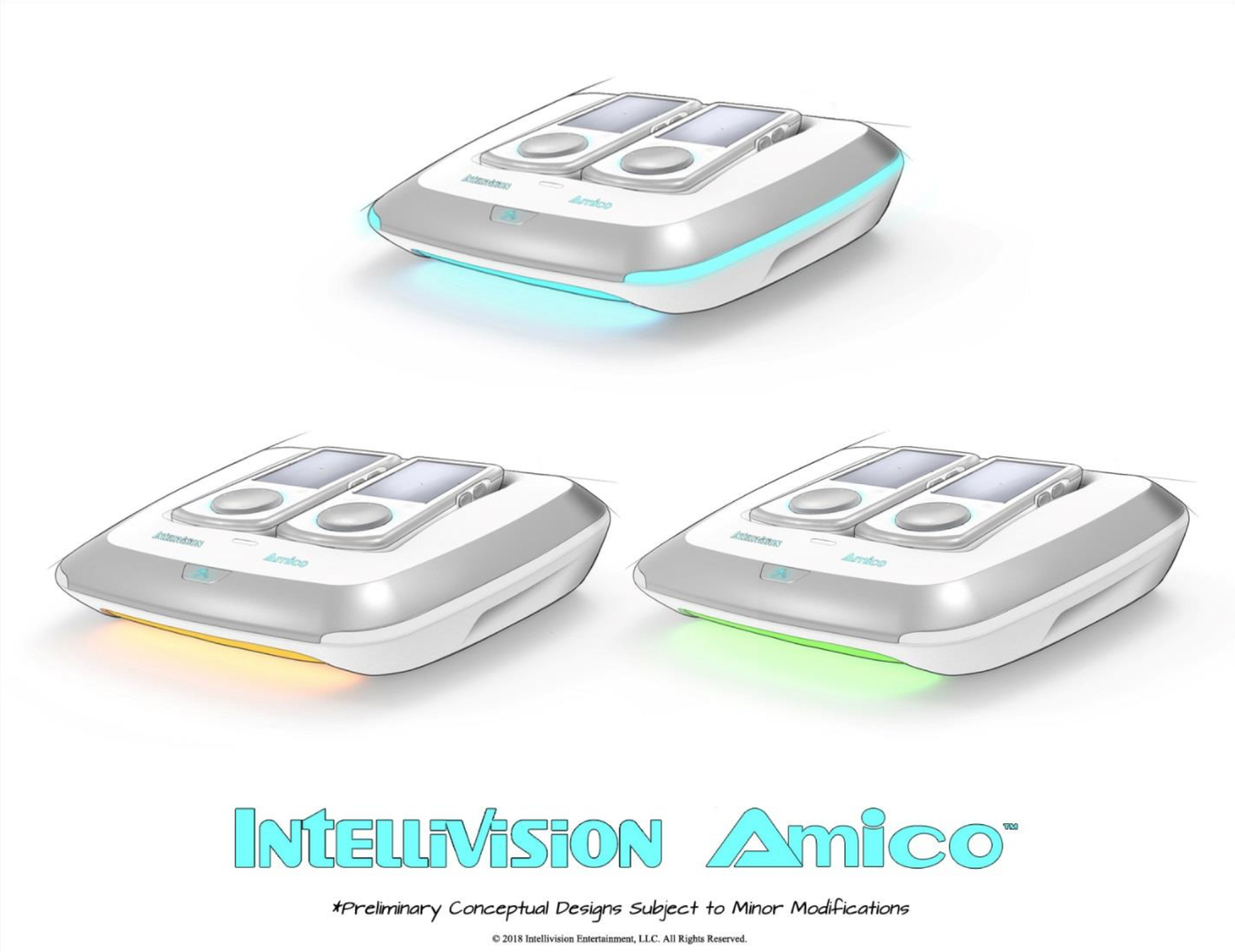 Intellivision Entertainment will be paying for projects to be made, keeping projects responsible in terms of budgeting. Using 2D will help reduce the risk of each project, but they aren’t afraid to lose money if some games aren’t good enough to meet their seal of approval – and will cancel those which are deemed ‘not good enough’ for Amico.

One of the most important potentials for the Amico is that it can help solve the issue of discovery on Steam and Mobile platforms; only quality games will release, indie games won’t be buried in half-heart titles made by folks who aren’t putting passion into their craft. As part of this commitment to quality over quantity, Tallarico promises “there will never be two games released at the same exact time” on the Amico. This means Every game will have its own chance to shine, and will even land on the front page of the Intellivision Online Store without paying a huge fee or gambling with luck.

As an answer to one major criticism about the controllers currently being seen in concept art drafts, Tallarico ensures there is a real joystick to use as a d pad, twin stick shooter firing button, or various other uses. It has a tactile feel, and the Amico’s buttons do too. It is stressed that everything being shown right now is prototype material and that final versions will vary. Hundreds of test products are being made until the team decides it has come out perfect. This console is not being developed by a small team nor a small budget! 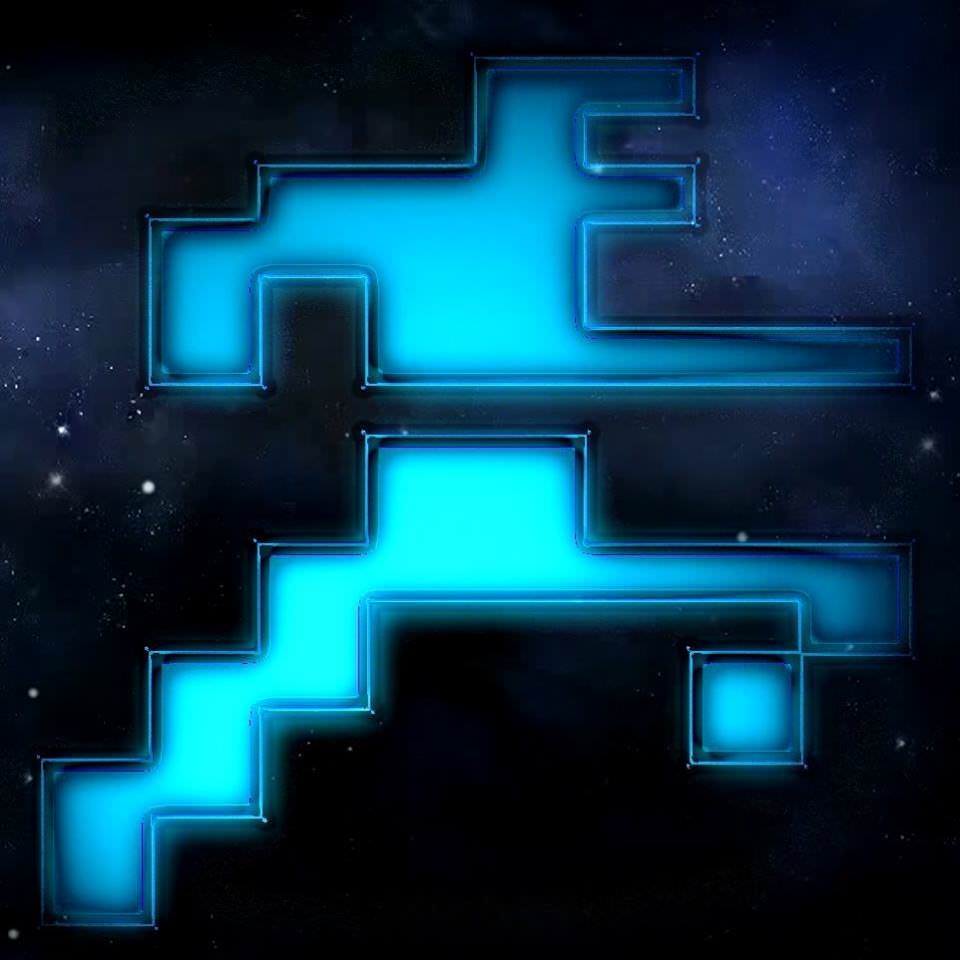 In addition to controllers, a companion app to use smartphones as controllers is also a possibility for many games. This is not necessarily ideal for all games but some titles like family game show types or simple control layouts like Tetris-style experiences can benefit from this feature. It means that everyone around can pull out their phones and play certain things together. Gamers can also purchase additional controllers for ideal experiences in every kind of game, with the system supporting up to 8 of either type (mix and match as you please).

Over 10 million dollars in marketing and famous celebrity endorsements will help make sure the Amico doesn’t fade into the wind. Intellivision Entertainment is a real gaming hardware company that hardcore gamers may scoff at before they get all of the knowledge, but once the games and marketing begin to launch for the Amico the world should be able to give it a real chance.

Personally, I am impressed and excited by a brand new vision for a new form of gaming to co-exist with the platforms we all know and love. I’ve always felt there was room for a huge 2D gaming scene and wish the very best for Amico. You can count on our team here at RealGamerNewZ keeping track of this console in the years to come! 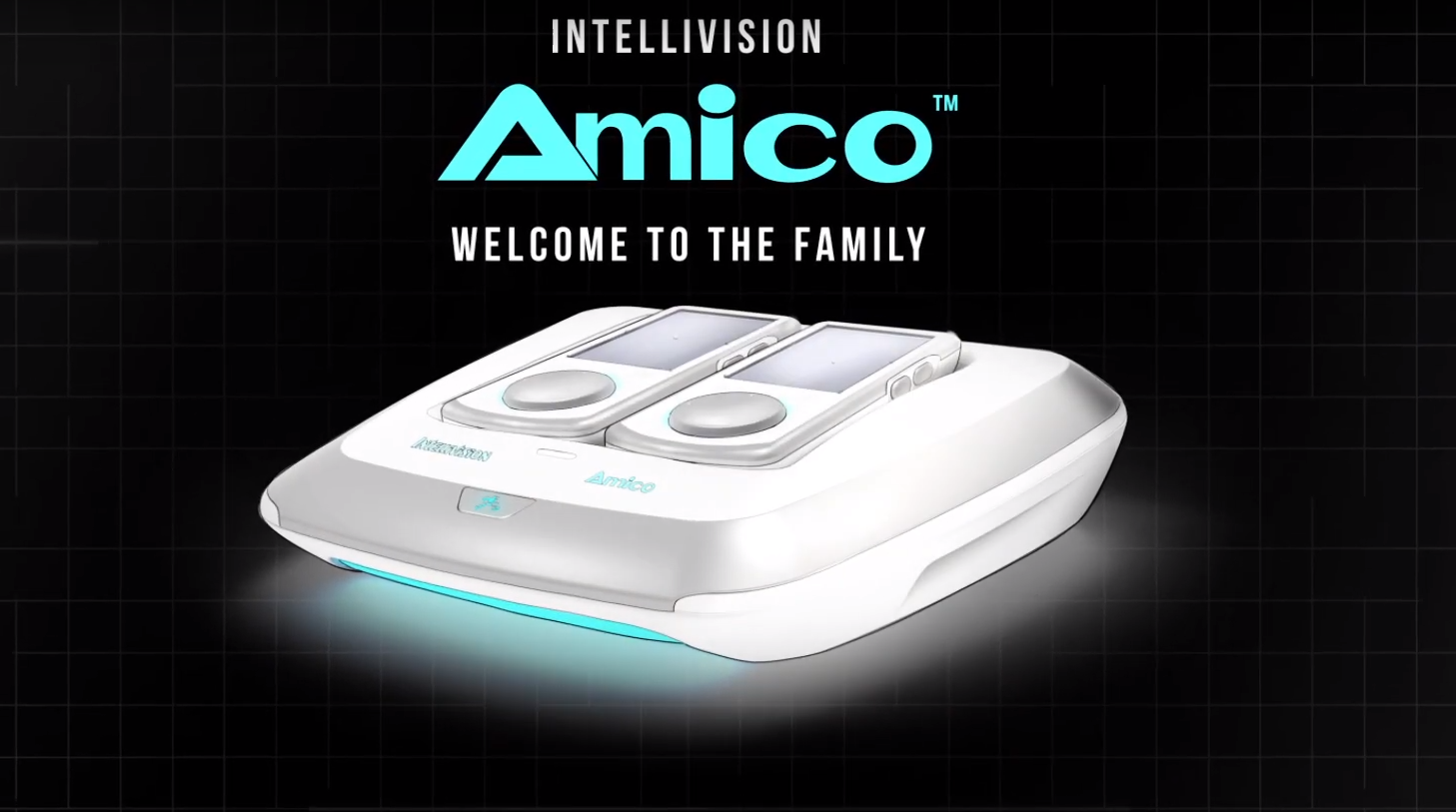 Here’s more on what to expect from the official press release:

SOFTWARE OVERVIEW
• All games are family friendly and rated “E for Everyone” or “E10+”.
• Every game version on the console is EXCLUSIVE.
• Quality over quantity! All games must past a strict quality control seal of approval.
• Balanced gameplay and design for Equal Opportunity Gaming™ for all.
• All games are downloadable and between US $2.99 – $7.99.
• No costly DLC (Downloadable Content) add-on’s or “In-App Purchases”.
• Launch to include several built-in reimagined Intellivision Classics (pre-installed in every console) and over 20 games including both reimagined industry classics and brand new exclusive titles via the Intellivision Online Store.