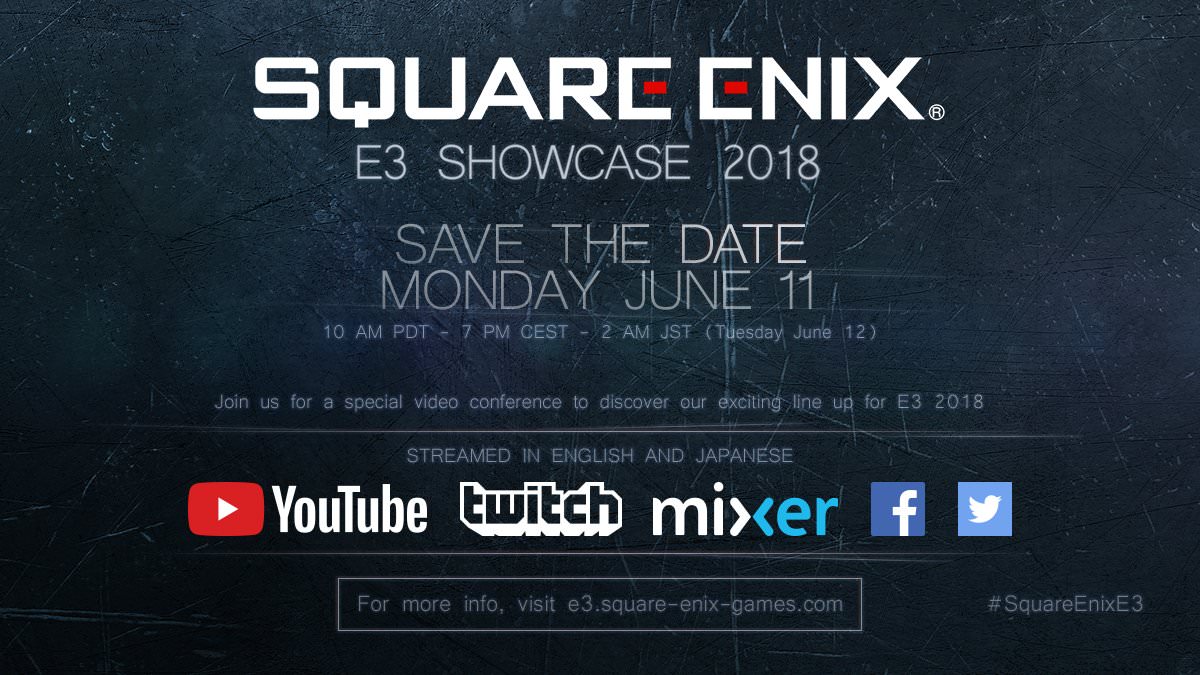 Square Enix hosted its own pre-recorded Press Conference today for E3 2018 in which a number of games were showcased, with two brand new games revealed. They did repeat a few trailers from previous reveals, but kept it short and sweet running just 30 minutes. RGN provides a recap in this article as well as all of the footage from the event. For those who didn’t already get the memo, Kingdom Hearts III now has a release date – which was shared with us again at this show as well.

The President of Square Enix came on the screen to let us know that the show will feature the company’s efforts in their 2018 projects and beyond. Cut-scenes made especially to illustrate a theme play in between game reveals. An arrow turns into a snake, then a lion’s head… and then…

SHADOW OF THE TOMB RAIDER

Lara Croft is in serious danger, there are no parachutes and her aircraft is tearing at the seems. She maneuvers the plane and tells Jonah to jump but he refuses. Suddenly the fuselage separates from the rest of the plane and she braces for impact.

Daniel Chayer-Bisson, Game Director at Eidos Montreal, lets us know that Lara is racing to stop the Mayan apocalypse against the brutal jungle environment while being outgunned. “Becoming one with the jungle” is her only hope, and a major gameplay system for the new Shadow of the Tomb Raider game we saw a sneak of yesterday at the Xbox show.

Like a chameleon, Lara hugs trees blending in closely. She exercises stealth to the maximum degree and gets experience points for performing well at sneaking, surprise kills, distraction / misdirection tactics, and instant / silent kills.

Gameplay takes us further as her enemies expect such tactics and roam around with light shining everywhere, in an attempt to disrupt Lara’s skulking. Bow and arrow as well as dagger prove to be essential. If bodies are discovered the guards go on high alert and will command each other to search efficiently. Combination attacks can be chained together though, and Lara can leap from man to man as she stabs them in their chests before they can utter a single word. Next, she lights a gas tank on fire and tosses it. Grappling, underwater swimming, exploration, and survival in 360 degrees, and a hidden city hub all feature in the game. More tombs are in this title than previous ones too. One more teaser clip is shown flashing scenes from all throughout the game.

Symbols flash around the globe in a metaphor for the online community behind FFXIV.,,

Next we are shown the Under the Moonlight patch for Final Fantasy XIV and its Stormblood expansion. Monster Hunter World will also be making a cross-over appearance into the Final Fantasy XIV game in Summer 2018.

THE AWESOME ADVENTURES OF CAPTAIN SPIRIT

Pictures of fan drawings are everywhere. A superhero boy is seen. This is Dontnod Entertainment’s The Awesome Adventurous of Captain Spirit which takes place between the events of Life Is Strange and Life Is Strange 2. It’s a full game for free on June 26th and serves as a way of introducing players to stories that will take place in the next game. Secrets and backstory are contained here that will help understand the next game. The game will come out for PS4, Xbox ONE, and Steam.

Those graphics and art direction that you know and love take screen. Dragons walk, humans run, horses gallop, and the sword is forged, glowing brightly. Light must shine on the darkness of this world once again. Many enemies and magical powers are shown as various characters stake their claim on the planet. Destiny beckons a great warrior to slay the forces of evil and protect the innocent, sealing the darkness away once and for all – but not until a long road is traveled and his fate is met. This is Dragon Quest XI: Echoes of an Elusive Age releasing September 4, 2018 for PlayStation 4 and Steam and available for pre-order now. There will also be a crossover with Final Fantasy Brave Exvius.

The ages of the past are shown in sequence of major events throughout the timeline of a well known universe. What led us to this place becomes a reminder of why we are here. The here and now that must become the sacred quest for righteousness. Armor and swords, magic and might. A new game developed by PlatinumGames for PS4 and Steam is revealed for 2019, Babylon’s Fall – published by Square Enix.

A masterpiece discovers a new home on Xbox as NieR Automata: BECOME AS GODS Edition is shown to house all previous DLC and Xbox ONE X 4K Gaming Enhancements. June 26, 2018 the title will release on the Xbox Store.

Wherever you wander, and whoever you meet along the way, the adventure will be one to remember on Nintendo Switch. Eight brave souls of various occupation ranging from Thief to Merchant to Hunter and beyond. Octopath Traveler challenges players to choose their own paths on July 13, 2018.

A tornado is throwing man’s creations around like they are playthings. An EDM beat rips through the skies as planes and jets crash and fall from it. Rico is back in Just Cause 4 in a fictional South American country created for history, secrets, and danger. There’s more variety in biomes and ecosystem than ever seen in the series. The Black Hand is a private militia that is out for blood in a game world with physics and destruction systems beyond what you might have imagined.

Sand storms, tornadoes, and lightning are not just for good looks. These aspects of Just Cause 4 will totally change the gameplay of any given moment if they cross your path. Jetskis, Micro-jets, a fully customizable grapple hook that can tether more than ever, booster rockets, and air lifters are all part of Rico’s powerful, creative tool set. The game is sticking to its “go anywhere, do anything” formula. Enemy AI has been heavily upgraded with unique abilities for each type of enemy. Everything that’s been shown so far is in-game and alive thanks to the brand new APEX open world game engine. December 4, 2018 players can try it out for themselves on PC, Xbox, and PS4.

City views are seen from a helicopter, then from the streets on foot. A man is deaf and being harassed by gangs on the street, but he didn’t come here by accident. “Silence Rings Loudest” we are told in the trailer of The Quiet Man, a justice-seeking,action game coming this August to PS4 and PC.

Disney and Square Enix collaborate to bring the world of Frozen, Toy Story, and others into Kingdom Hearts III, a game fans have been waiting almost a decade for. We are shown the same trailer that was revealed at the Xbox E3 giving a gameplay preview, with slight edits re-arranging a couple scenes, but nothing major. Sora is back with friends, some old, some new. The game arrives on January 22, 2019.

A flash sizzle reel is shown recapping all of the Square Enix games we’ve just been shown. Square Enix thanks the fans and reveals that they’ll be providing more updates on the games shown throughout the E3 days to come. 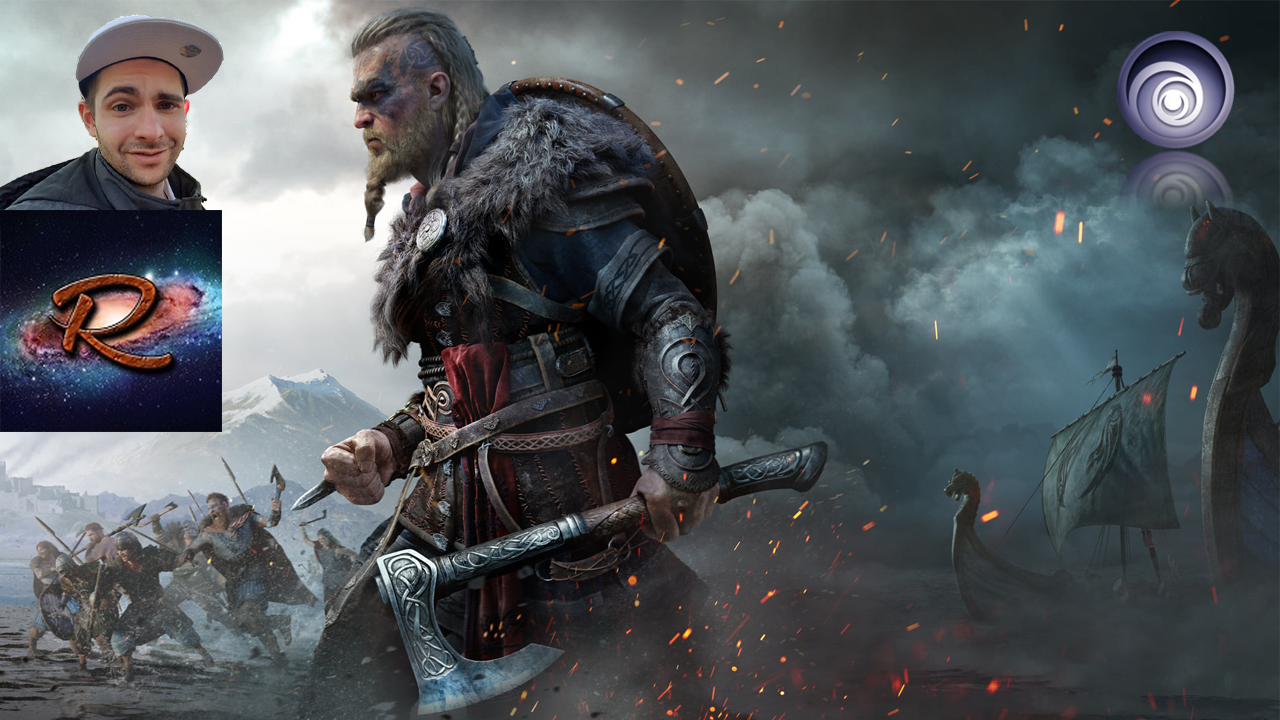