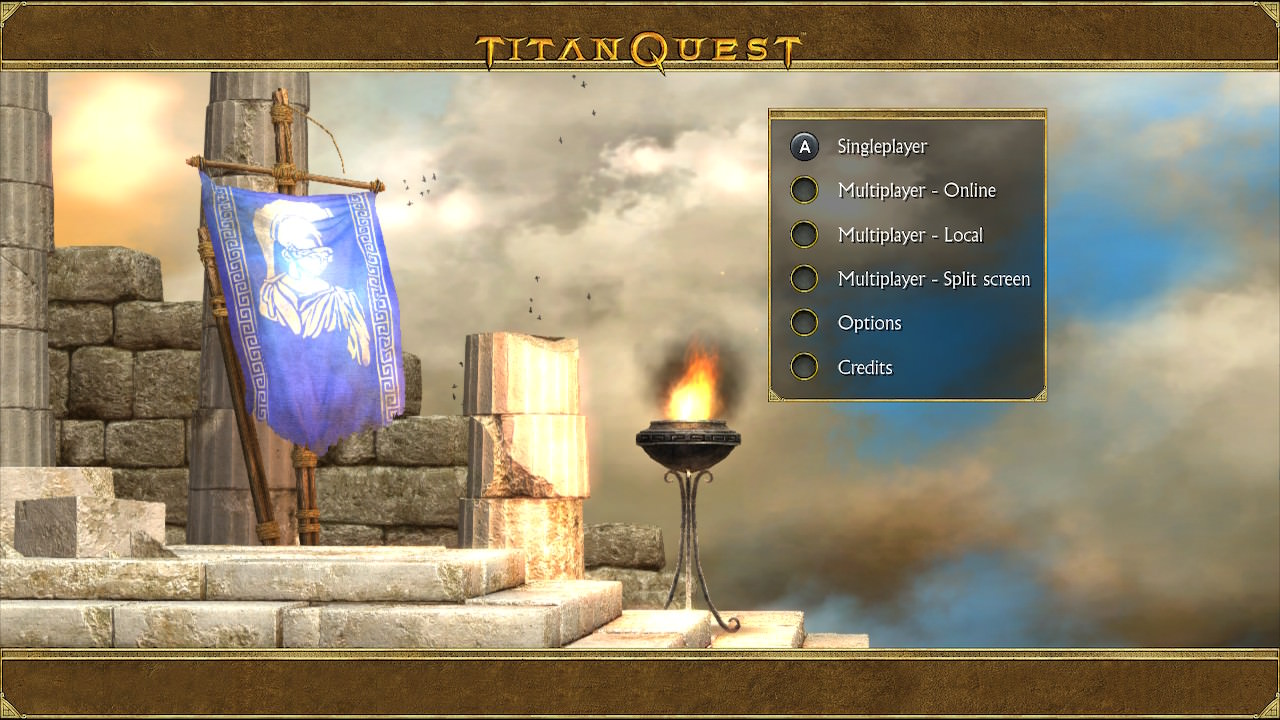 Titan Quest is a remaster of the 2006 PC title from the heydays of THQ, brought back from the dead by THQ Nordic (formerly Nordic Games). Like its re-releases in 2016 for PC, and earlier this year for PS4 and XBOX One, Titan Quest is a remastered version of the 2006 PC game of the same name (a personal favourite of mine growing up). This version of the game has been altered with updated visuals, newer console-friendly controls among many other “housekeeping” alterations. 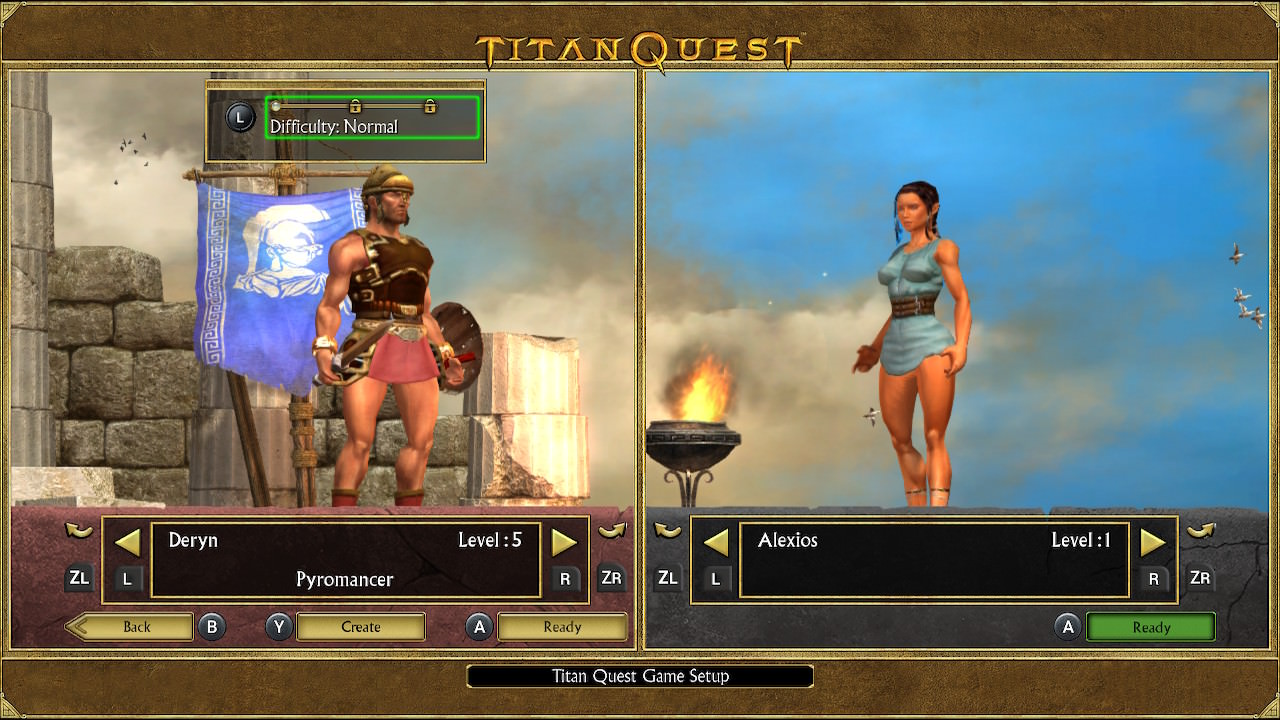 Titan Quest follows a hero named by the player in their quest to combat the Titans of old who escaped their exile by the Olympian Gods when the seal is broken between the mortal world and the world of the Gods, Olympus. Titan Quest takes you across Greece, Egypt, and parts of China whilst you hunt the Titans. The game tells its story through cutscenes and in-game lore sources such as humans you speak to, journals, and signs – very similarly to the games it emulates in Blizzard’s “Diablo” series. Whilst the characters you deal with are mainly throw-away NPC types, you also come in contact with notable Greek figures and Gods such as Zeus and the Spartans. 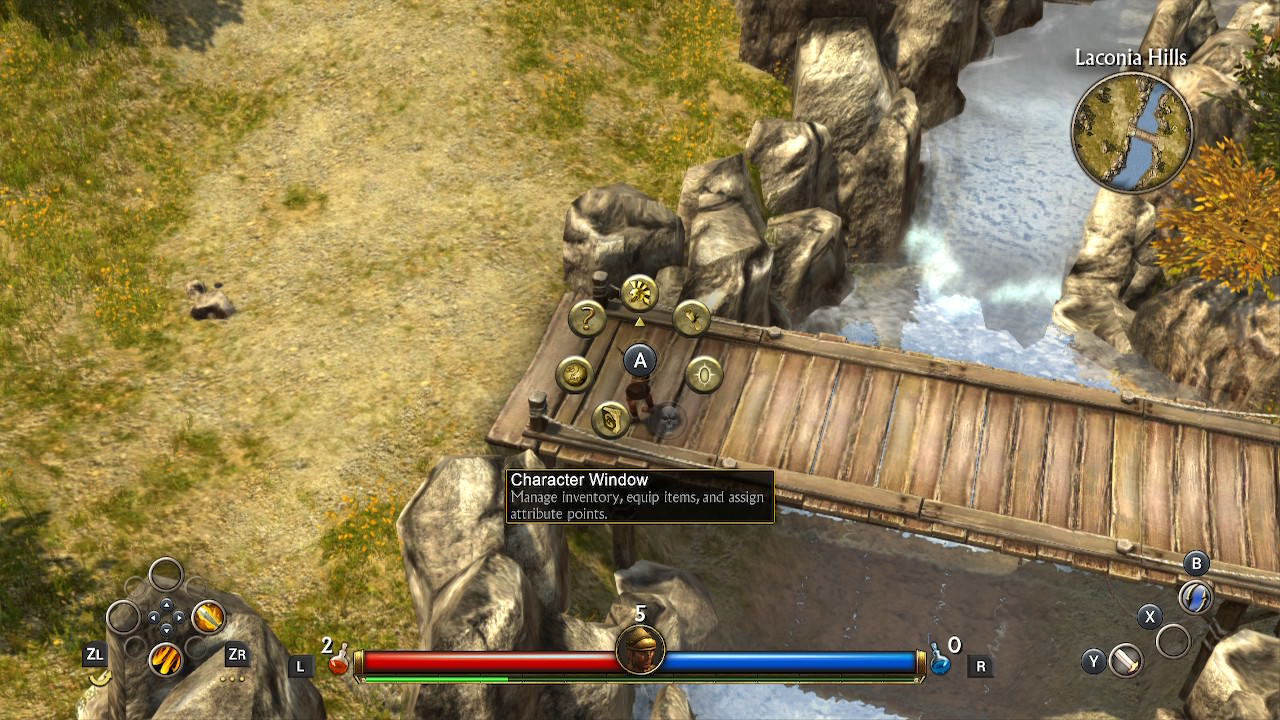 As previously stated, Titan Quest takes a lot of its base formula from Diablo, being an open-ended ARPG with skill building, looting, combat, and careful maintenance of weapons to turn your lone wanderer into the saviour of the world. Not much has changed in terms of how the game itself plays, but the HUD and controls have been overhauled to be functional on the Nintendo Switch such as placing skills on a wheel for easy spell casting and changing the keyboard and mouse-style controls to a controller-friendly style where you move with a joystick over clicking with a mouse. Iron Lore and THQ Nordic saw the original had been fairly well designed to begin with but the streamlining of controls and commands was an improvement over the PC version (in my opinion at least as a console gamer first, PC gamer second). 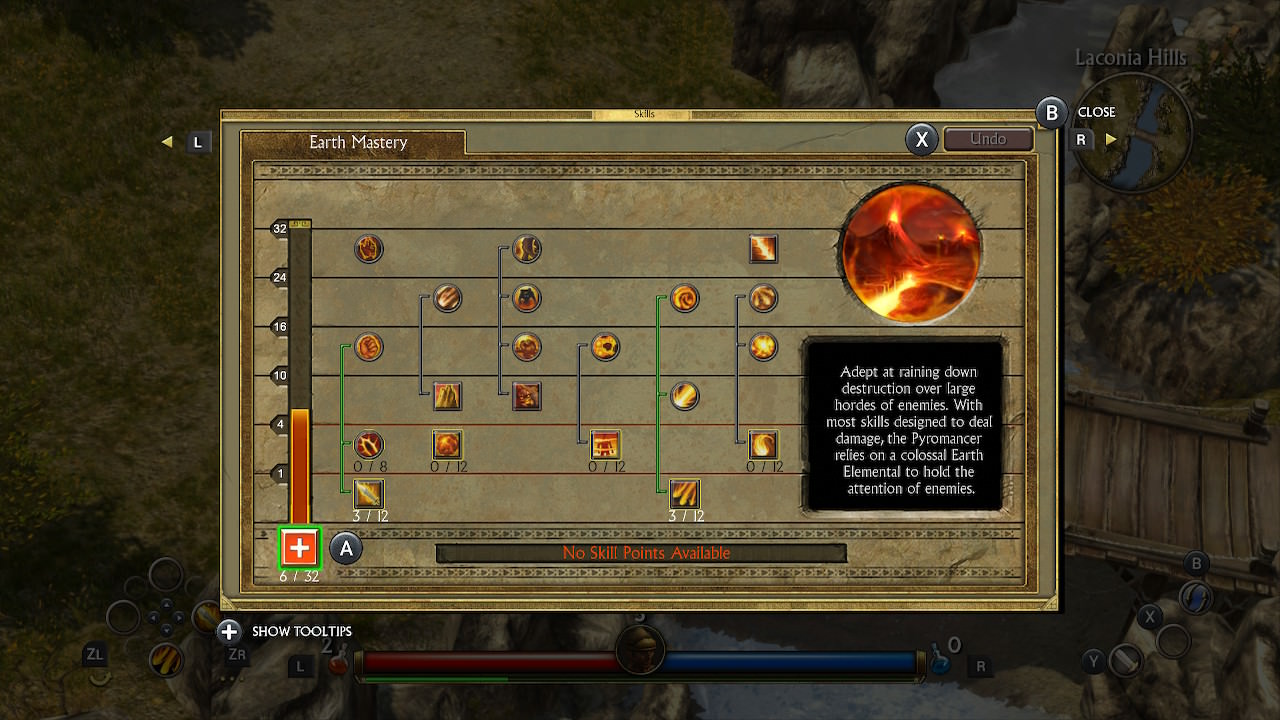 The graphics and textures are not vastly changed from how they looked in 2006 – 2007 but have been touched up to be a higher quality and while the game seems to be locked to 30 frames per second on the Switch itself, the game has some infrequent FPS drops when in heavy combat. There are also some pretty long load times when trying to use the teleport function, which makes item grinding a little irritating as you can lose a lot of time to the loading screens. Besides that, there aren’t any major issues as the game boots up and loads your saves rather quickly. Overall, this version plays as well as the 2017 PC Anniversary Edition does, aside from the locked frame rates.

Like the graphics, there is not a vast improvement over the original in terms of sound design, but it sounds just as awesome in 2018 as it was in 2006. The enemies’ groans of pain, the clanging of swords and shields, the sound of gold clinking, and the always hilarious “your inventory is full” voice alert are still enjoyable 12 years later. Voice acting, while dated, doesn’t take away from the overall experience either. The music is atmospheric with calming harps and flutes in times of peace and harsher strings and drums during heavy combat sequences. 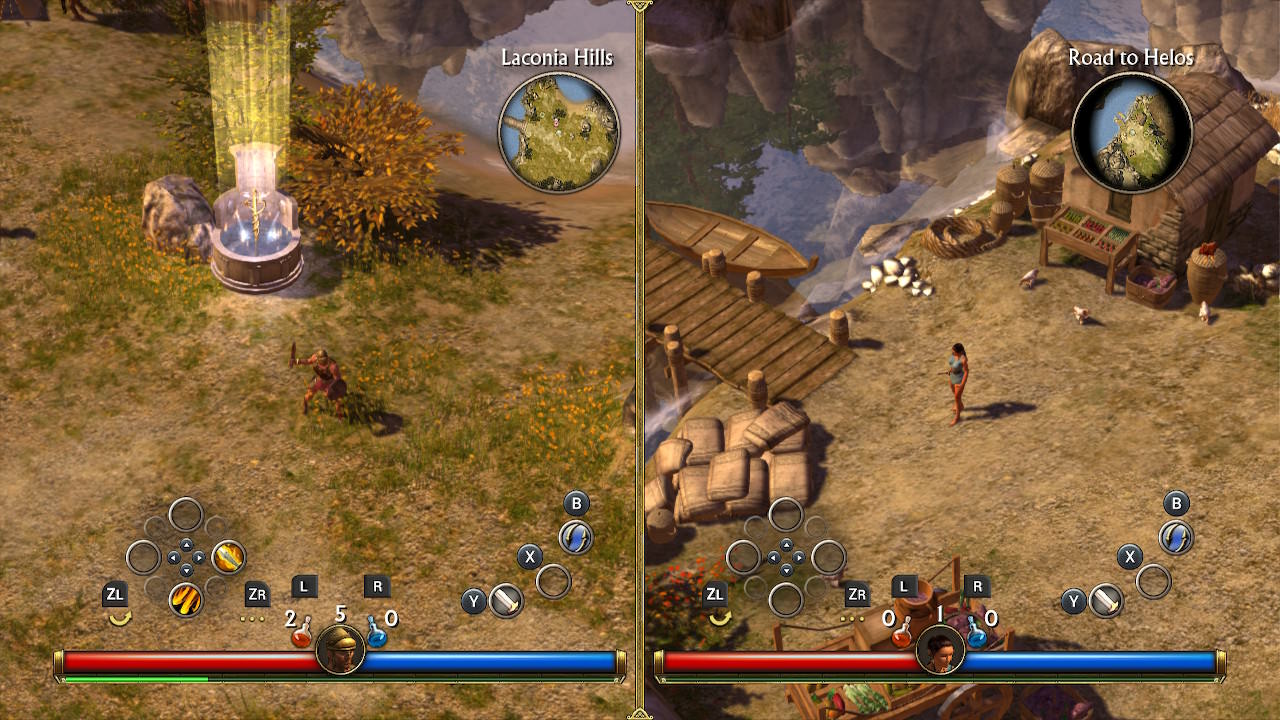 Returning from the original game is the online multiplayer options (LAN and Online play) but similarly to Diablo III’s console ports is the addition of a local split screen mode to allow for two players to play together on one console, but unlike Diablo III, Titan Quest’s local mode allows for the players to be separate from each other as each “screen” is independent to the other instead of a shared screen. When the game does get a full release, I’ll surely be playing online but while waiting for it, I had a blast playing the split screen mode.

With a skill tree featuring eight different branches, where a character can only pick from two branches, the game allows for multiple different playthroughs. Very much like any ARPG, there are loads of side quests and optional dungeons as well as vast amounts of land to explore whilst following the main quest. As well, the expansion pack that the original game featured; “Titan Quest: The Immortal Throne” is coming as an optional DLC for the Nintendo Switch after release, which adds an additional 100 hours of content on top of the base game which can be played for at least 100 hours itself alone. 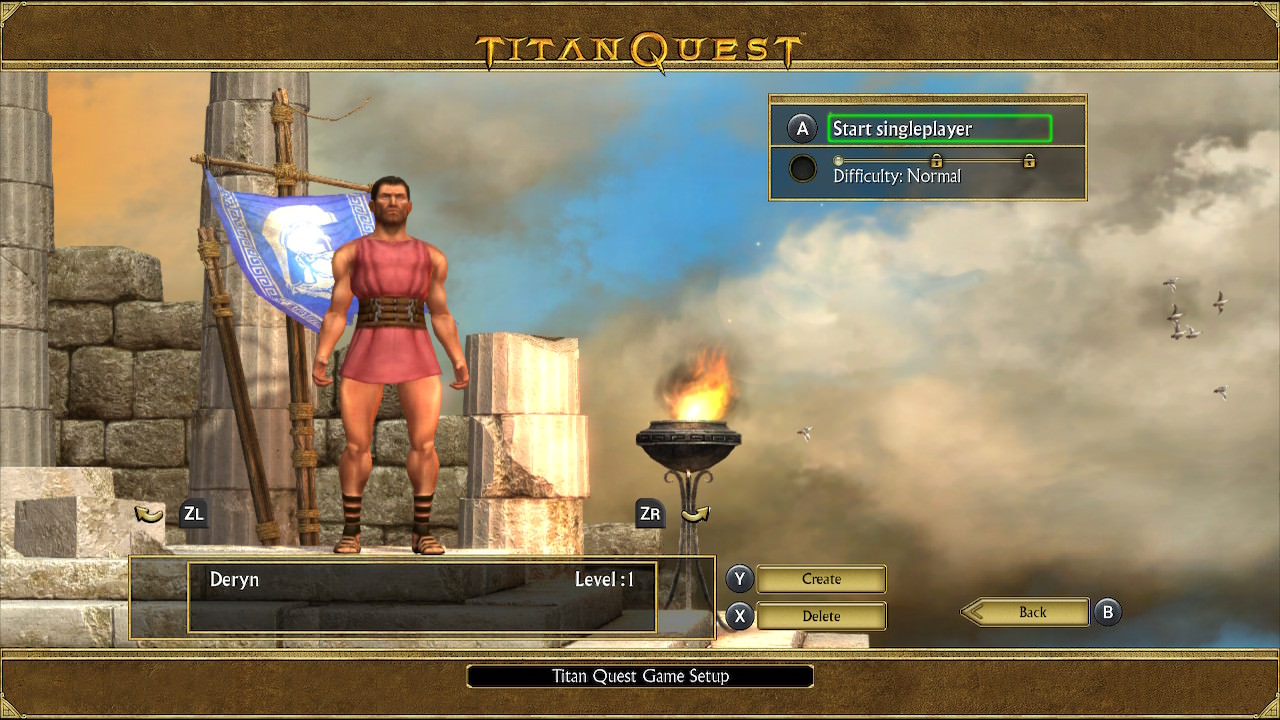 While not a vast improvement over the original, the improvements that were made to this version such as the addition of split screen, updated visuals and great console controls, this is among one of my favourite remasters brought to the Nintendo Switch. As an ARPG nerd and Greek mythos fanatic, this is the best ARPG I can recommend for the system and for anyone who loves games like Diablo, Pillars of Eternity and Torchlight-this is a must-play title for Nintendo Switch. If you can get past the slightly dated visuals, you can find yourself immersed in an experience that can turn your 2 hour commute to work feel like mere minutes.