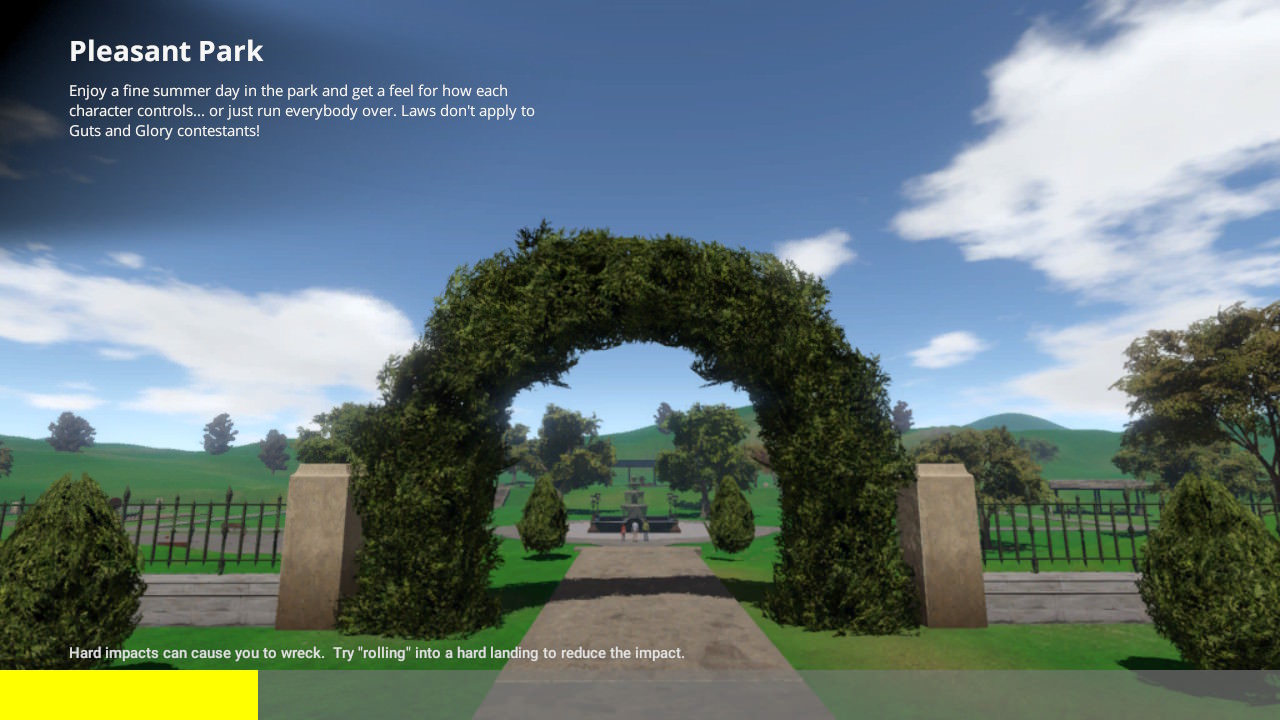 Guts and Glory is a port of the popular PC title by HakJak and tinybuild Games. While the PC version is well-known for its vast amount of community-driven levels and being a generally good game to laugh at, this version is funny in all the wrong ways. This review serves to review the game’s base concept and the quality of the port itself, which is sadly quite poor unlike other recent tinyBuild games which have been excellent such as GARAGE: Bad Trip, Graveyard Keeper, and Outpost Zero.

Guts and Glory in itself features nothing of a true “story” but instead links levels together as part of a reality show featuring a crazy cast of characters in a wide variety of vehicles. Players are game show contestants trying to survive the challenges set forward by the reality show and avoiding death along the way. The Switch version as well is limited exclusively to the ~100 HakJak “official tracks” scattered among the nine included chapters (if you can even attempt to play them). 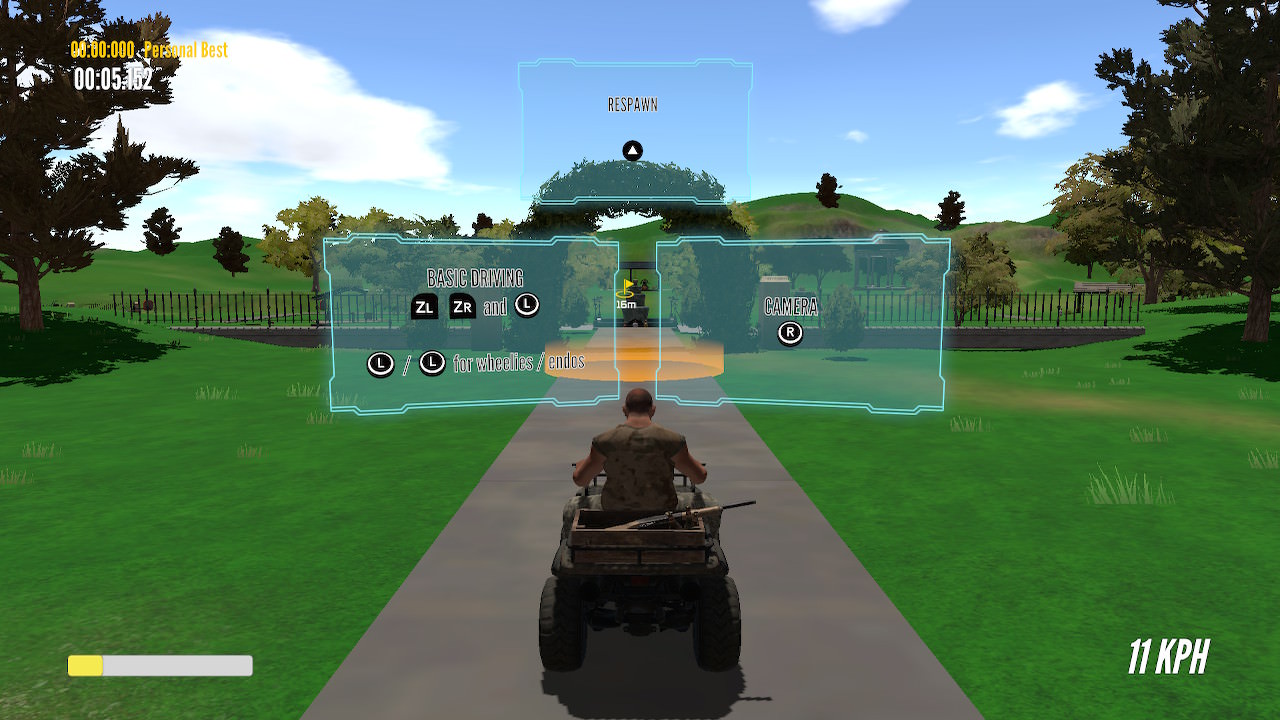 Guts and Glory is a ton of fun with a very unique take on facing challenges in levels. You control a character operating a vehicle (mopeds, scooters, bikes, cars or even jetpacks) in small levels with checkpoints and hazards where you are being timed on your performance. Playing like a 3D version of mid 2000’s Java game “Happy Wheels” with all the hilarity of guts, gore and gruesome deaths in full 3D, the game itself doesn’t take itself seriously and is a bundle of fun. Guts and Glory feels okay at first on the Nintendo Switch with fairly simplistic controls that are very user friendly when the game can manage to run stable enough to play. 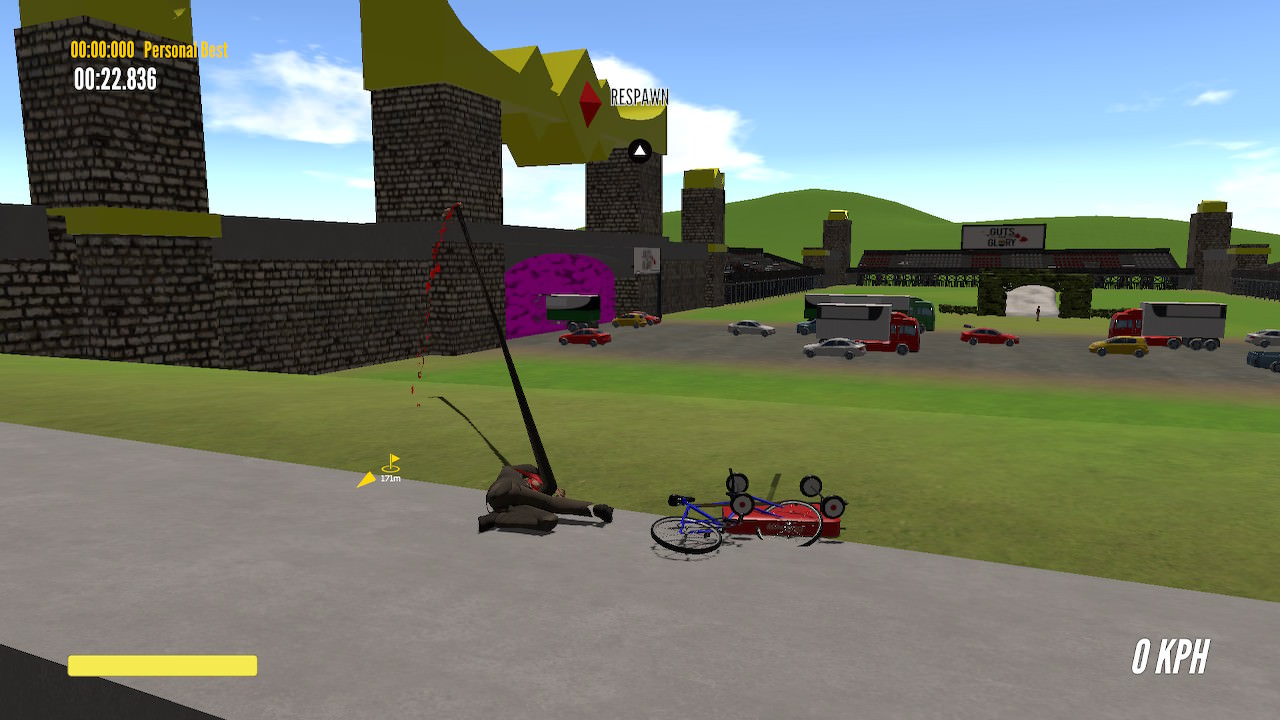 This is where Guts and Glory’s Switch port completely falls apart. It seems as if this port was rushed or the team in charge of development wasn’t able to properly optimize the game for the Nintendo Switch. Aside from the sub-30 FPS framerate, you are also forced to take a HUGE graphical downgrade that looks like the game was put on a machine from the year 2000 at its lowest graphic setting and the “guts and gore” look absolutely horrible as well.

I wouldn’t have been angry with the lower graphical fidelity had the game at least been stable during basic gameplay but neither TV mode nor handheld mode do this game any justice as both modes cannot make the performance any better.

I ended up having to turn blood and gore options off in the settings as it was the only way to get the game to run steady and I couldn’t fathom looking at “potato” graphics any longer. Don’t even bother trying to play any of the levels passed the first two “episodes” on the Switch version because too much is going on for the port to even handle it. I’ll just allow my screenshots to speak for themselves. 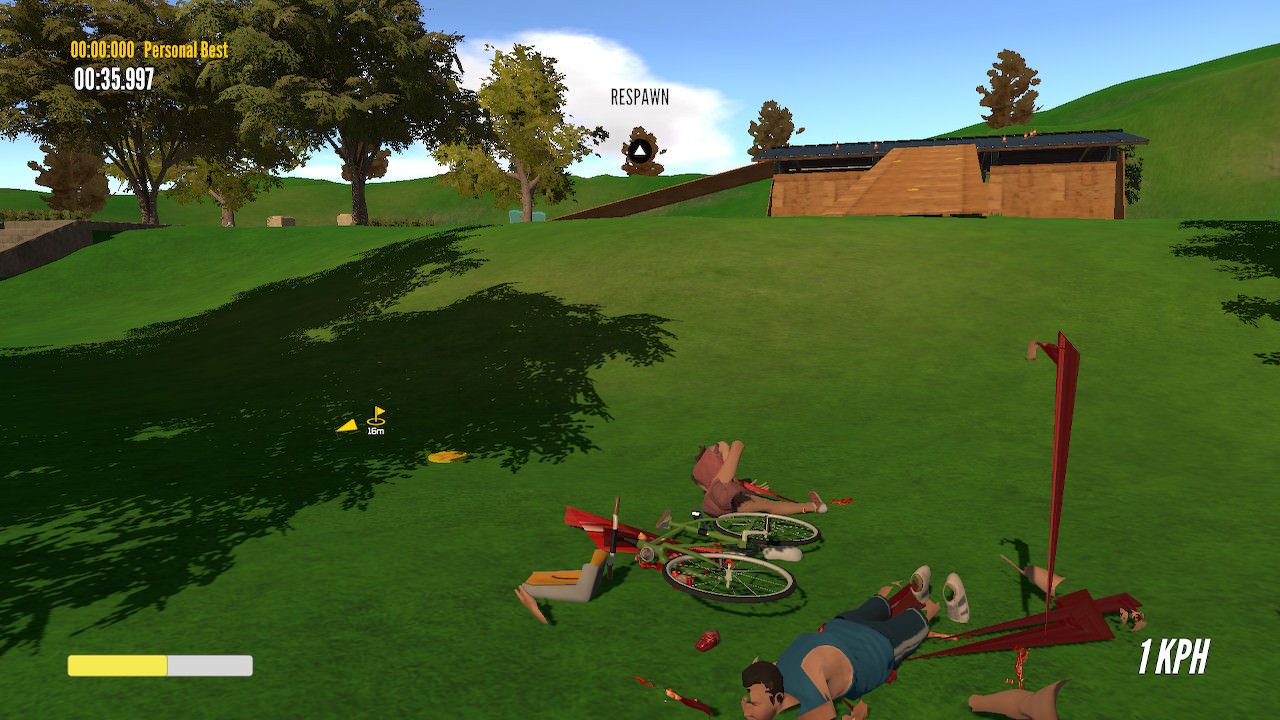 The sound and music volumes are poorly mixed with music frequently cracking and distorting and the sounds being delayed compared to the action on-screen. While the soundtrack is rather well done and is good for the atmosphere of the game, the frequent cracks and distortion ruin it on the Switch version.

This version has no multiplayer aspects, nor does it feature the level creation suite or community levels that the PC version has. Perhaps it may come in a later patch, but unlikely. Another huge omission. 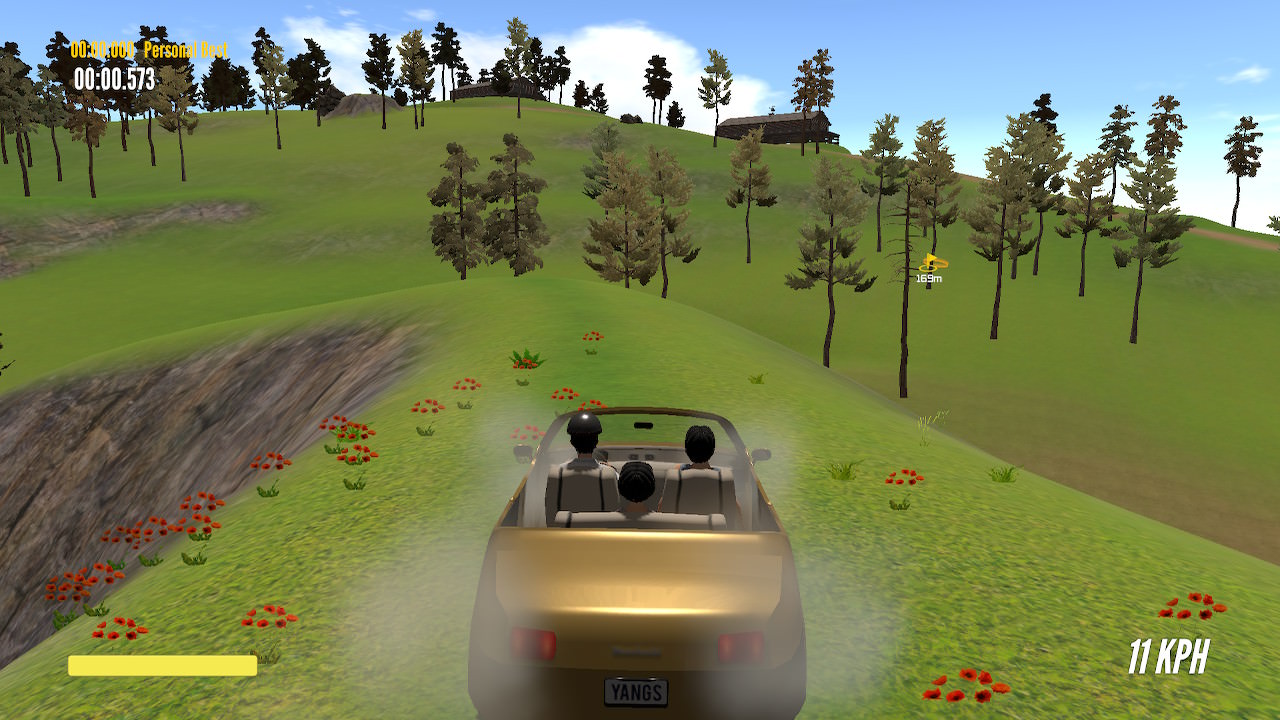 Honestly, there is no reason to play this version of Guts and Glory as it is a weak port with none of the community levels or level creation suite that add replay value. Despite there being about 100 levels that are made by the dev team, you will struggle to get through them due to the poor performance of the game engine in this port. 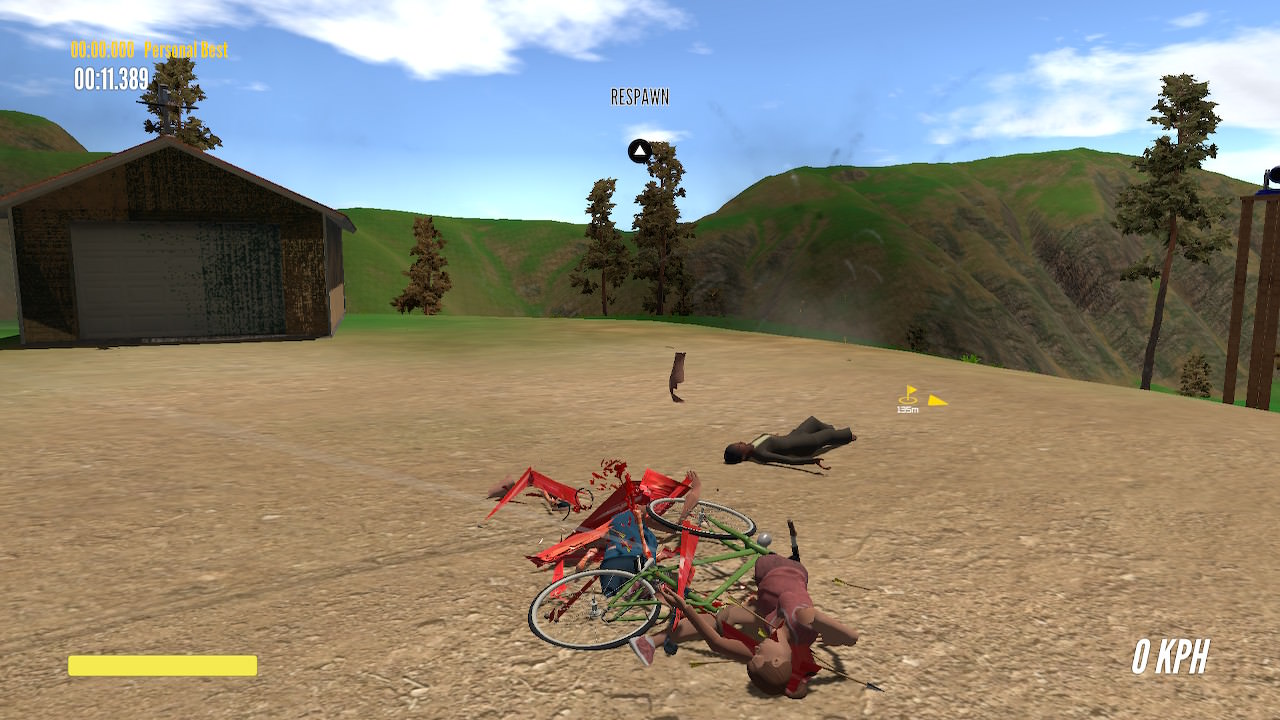 Guts and Glory? A fantastic title that I could recommend to anyone in need of a fun game to kill some time, but this version is without a doubt the worst port of any game I’ve ever seen in my life. If you have any remote interest in this game, stay away from this version- grab it on the other consoles (PS4 and XBOX One) or preferably the Steam version if you have a Gaming PC.

Despite the harsh criticism I have for this port, it isn’t a complete lost cause as through the possibility of patches the issues this port has could be fixed– but this is how the game launched and it puts a bad taste in my mouth for Switch ports, which seem to be a recurring issue as of late.

Guts and Glory on the Nintendo Switch gets a 3 out of 10, and while we normally assign precious metals such as Platinum, Gold, Silver, Bronze, etc. to our best game reviews – this one gets a solid rating of TRASH… It’s a shame that this poor port job of an otherwise good game will be a stain on tinyBuild’s otherwise excellent reputation for finding and publishing some of the best indie games around.