Flat Heroes is a port of the 2016 Steam Early Access indie PC action platformer / party game of the same name, releasing to coincide with the game leaving Early Access on August 2nd, 2018. Flat Heroes may present itself as fairly minimalistic at first; it has a lot hidden under the surface.

There is no “story” to be found here, with the game just having chapters of 10-15 levels at a time that you progress through as your little coloured square in varied levels that grow in difficulty as you progress with boss creatures sprinkled in. This doesn’t diminish from the overall experience because progression feels organic through the use of these chapters and you can progress at whatever pace you wish. And yes, you play as just a square but as you progress, you feel like you are becoming a flat hero yourself. 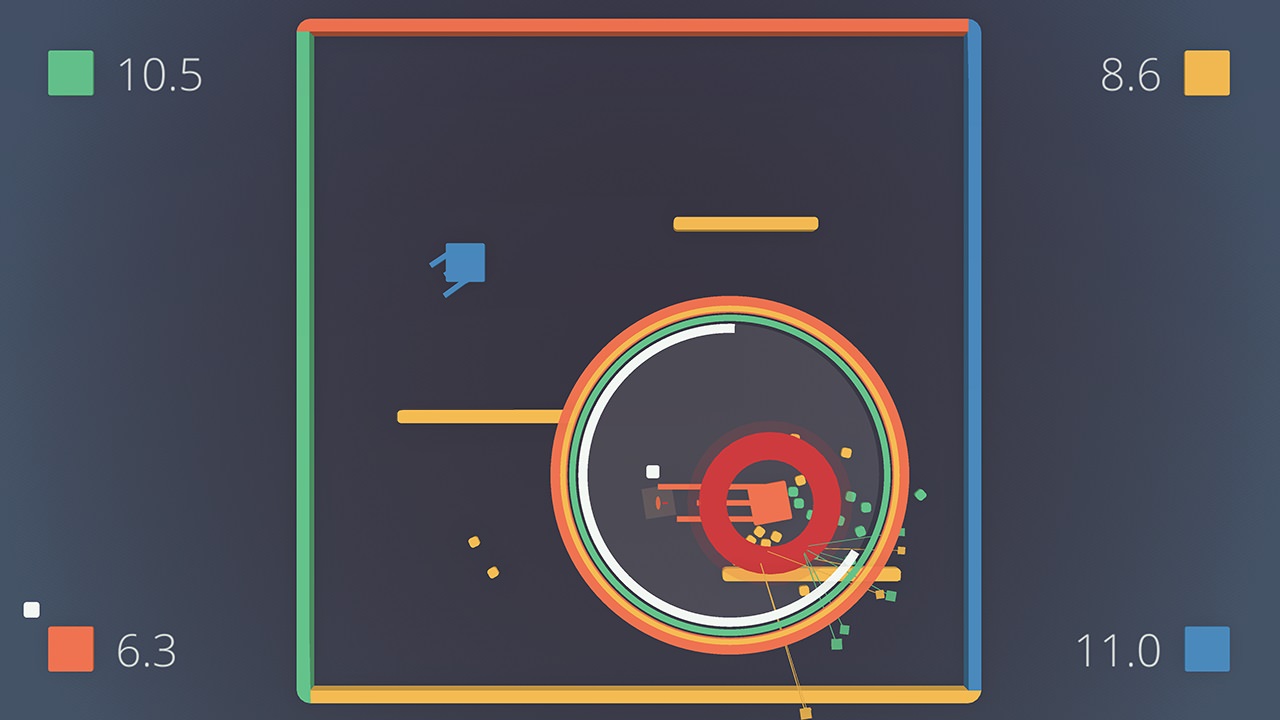 While simplistic at its core, with a control scheme simple enough to play the game with just one Joy-Con, Flat Heroes is an action platformer with a wide variety of level structures that required speed, logic and strategy to complete and a fair difficulty curve as I progressed. Levels progress through players defeating other enemies and blocking the enemy attacks through clever play. With a control scheme of three commands; jump, move and block, Flat Heroes is a smooth experience to play albeit occasional issues with timing of jumps. Great for the Nintendo Switch for its portable nature and this game being very easy to pick up and play in short bursts.

Flat Heroes is fairly graphically simple, being a 2d game with simple character models and minimalist design but features such a wide array of colours that create a unique experience with a focus on a lot of geometric shapes. Performance-wise, Flat Heroes is great, being smooth in both its single player and multiplayer modes, with no drops in performance that I had noticed whilst playing. 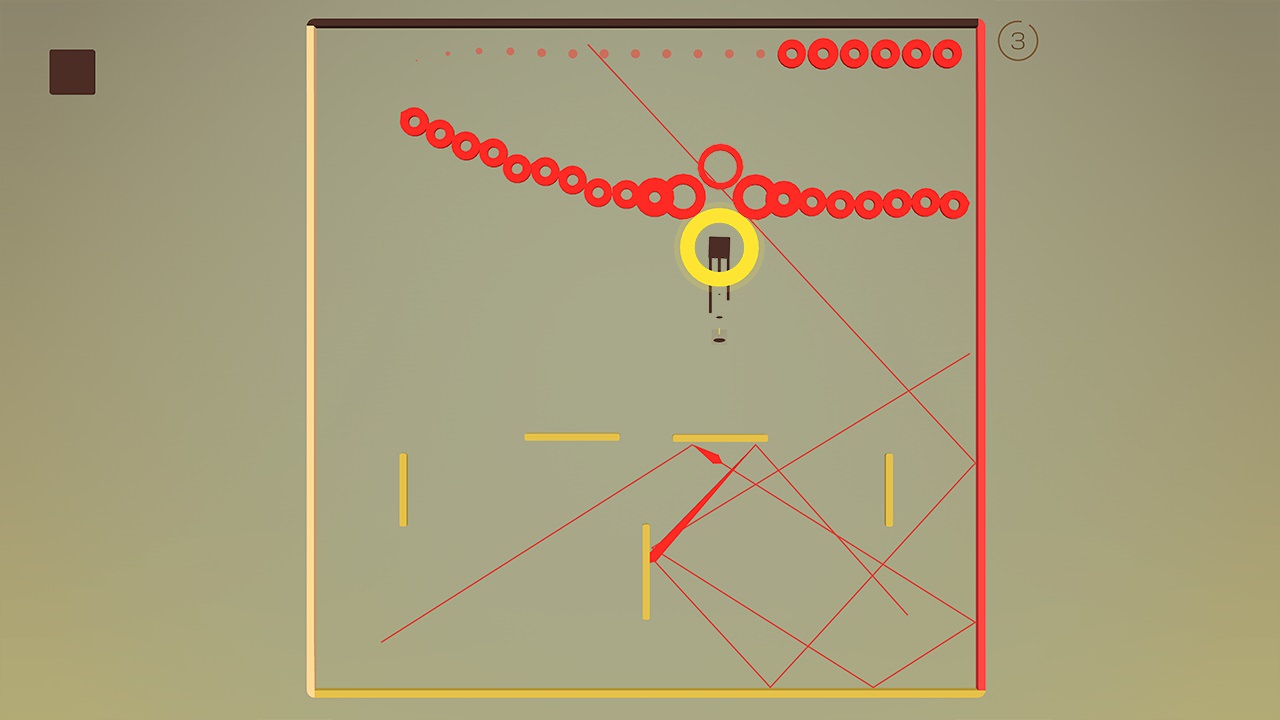 The music in Flat Heroes is a highly energetic electronic soundtrack that always seems to match the action and help drive the point that this is a fast paced game, featuring a lot of different electronic instruments. The various sounds in-game are mixed well and are never drowned out by music.

While there isn’t any online capabilities, the entire campaign mode can be played with up to four people as well as a “versus mode” with four modes of play. This is where the game shines, adding a party game vibe to Flat Heroes and gives the game an extra layer of replay ability. If you get stuck on a specific level in the campaign, grab a friend or two and you can get past that level, and if you don’t have friends nearby, the versus mode features AI enemies (that are absolutely heartless) to play against. 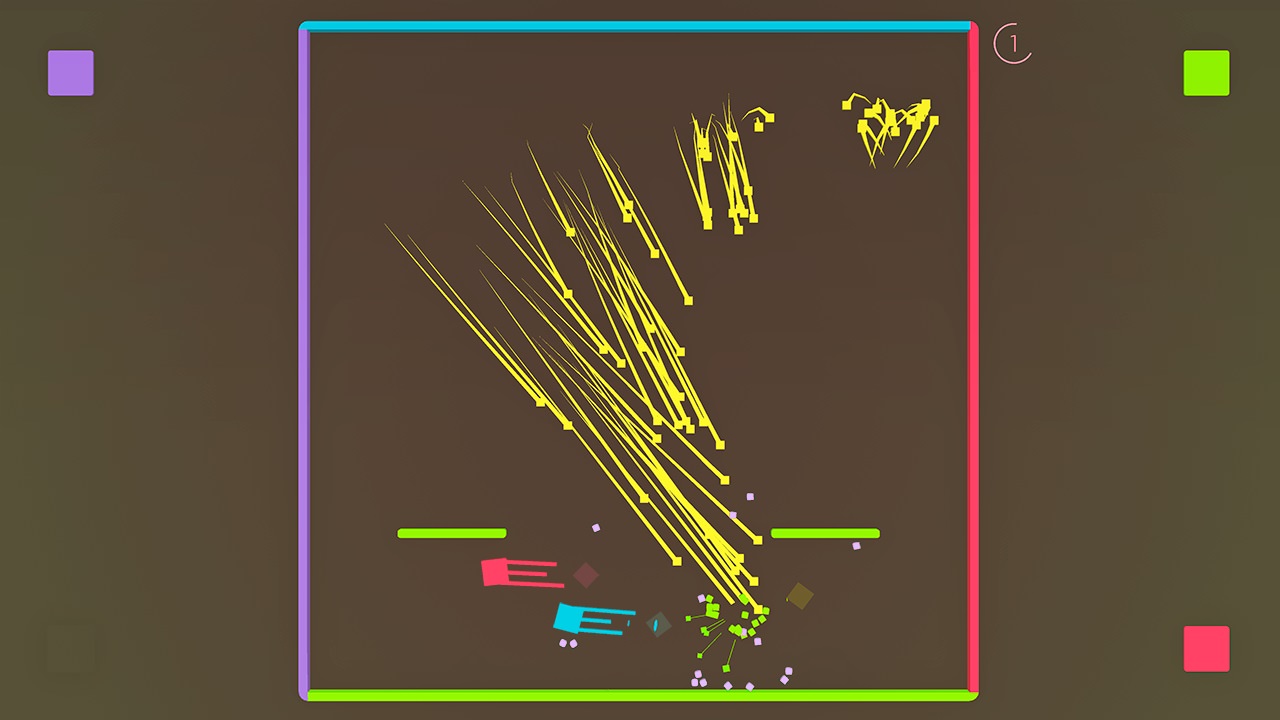 As the game features 300+ levels, you will find yourself engrossed in these levels when you first play them but once you beat them, there’s no reason to play them again, solo at least. However, with the addition of drop in couch co-op and versus mode, you can get a lot of hours of fun if you can get a couple friends together.

Flat Heroes is a game that could be enjoyed by all gamers, whether you want to sit back and play for a few minutes, or grind out all the levels at once and with increasing difficulty as you go along further in the levels this game is sure to bring some entertainment on any long commute, or simply as a time killer. As a single player experience, it is pretty good but when you add in the multiplayer aspects, this is a fantastic game with a ton of fun to be had, making Flat Heroes a great package overall that will make you think and with friends will make you smile.