If you’ve been playing shooter video games since the days of Quake and Unreal Tournament you may be finding the likes of Call of Duty or Battlefield too convoluted by kill-streaks, character classes, perks then you may enjoy MOTHERGUNSHIP. The creator behind Tower of Guns joins up with Grip Digital and Terrible Posture Games to produce the next chapter in the bullet hell genre.

With story-line being one of the weaker points of the game, there’s still a lot to live in this department. The plot and its cast of characters can best be described as ‘campy’, meaning that the writers of MOTHERGUNSHIP intentionally over-exaggerated various elements of the title in a sort-of parody fashion. The typical ‘only you can save the world’ theme is applied to a space opera. 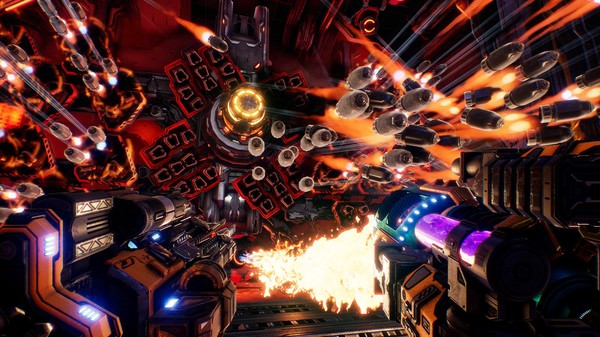 Some levels seem to be designed by hand while others take pre-made segments and re-arrange them with variations causing play-throughs to feel unique, but not every single moment you’re playing. This seems to be a good strategy in the level design of the game as it avoids some of the frustration caused by completely procedurally generated titles that don’t give the player a chance to learn the maps.

Bullet detection is incredibly accurate, the enemies are creative and interesting, and the overall impression of the gun crafting system is very exciting at first. The downside is that after a while players may start to feel like they’re just making due with whatever they grab, and don’t really get the opportunity to make their ideal weaponry. Although you bring a bunch of equipment back from a level after completing it, only 3 objects can be taken into the start of each map.

This limit is somewhat necessary since the game relies on deadly enemies that are well balanced, and don’t particularly scale up in the way of bullet sponging as you go forward. Again, for the best perhaps – but not perfect. The player will also gain more and more abilities such as double and triple jumping. Some of the game’s systems are so well designed, it’s a shame that such a high quality game still manages to feel like a chore to play at times.

Going with a simulation look that we’ve seen many times before, sort of like a high-end version of spectrum style graphics with sharp vectors, a neon color palette, and non-realistic blocky models reminiscent of 90s games. The graphics get the job done and are by no means bad, but for a bullet hell title it is surprisingly challenging to see what’s going on sometimes. Some of the boss battles make MOTHERGUNSHIP feel like a Mario game with guns, as hilariously large bullets or storms of fireballs come at you. 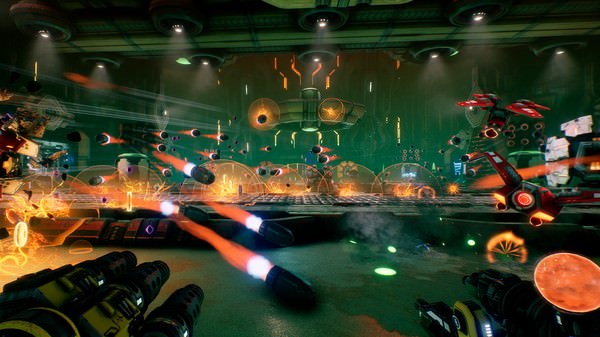 MOTHERGUNSHIP features rock and roll ballads that really get the blood pumping and touch the heart. One of the strengths in this game is certainly sound design which is very crisp and clear.

This month (August 2018) co-operative play was added to MOTHERGUNSHIP allowing two players to join up and kill together. There’s also an Endless Mode, in which players fight their way through a more and more difficulty ship. The overall core gameplay loop also provides within itself a ton of replay ability through the ability to create brand new weapons, discover new levels, and do a better job at saving mankind. If you pick this game up you will see right away that the amount of content per dollar is at a valuable ratio.

The cynical side of me gets a little bored of the gameplay and story even though they are very well fleshed out and in theory should be incredibly fun to tackle, this is a good game, but there just feels like a little something is missing. MOTHERGUNSHIP gets a 6.8 out of 10 in order to symbolize that it just barely falls short of our Bronze Game Award and still fulfills much of the necessary attributes needed to be a worthwhile video game.